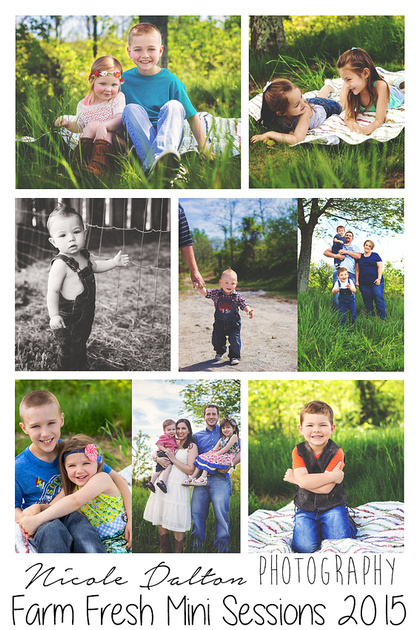 I am always nervous when I schedule outdoor sessions. But a full day of outdoor mini sessions with several participants over a span of several hours? Yeah, that makes me more nervous than normal. The weather can be so unpredictable, and spring weather in WV is even more unpredictable than a lot of places. When May 2 finally rolled around, I could not have been happier. The weather was PERFECT, and the location looked amazing! We were truly blessed with a picture-perfect day, and all participants arrived looking wonderfully-prepared. I was more than happy to spend such a beautiful day at The Dalton Farm with some beautiful people! Nothing beats a fun day of photos!

The O'Neal family were first on deck. Jen's kids are early risers, so she always likes the earliest appointments I have available in order to catch them when they're in their happiest moods. Julianna and Lawson did so well, and Jennifer and Luke looked lovely, especially in their couple shots.

Cooper was next. His mom herds a large brood of young'uns, so things are always hectic for them. I empathize with her greatly, as I know how much of a task that can be. I hadn't photographed Cooper since his newborn session, and I was thrilled to have him with me again. He is just adorable. Lisa says even though he is a content baby and never cries, he just doesn't smile a lot. So we didn't get many smiley pictures, but what we got was gorgeous just the same.

The Workman family showed up next. I had my first session with Colton & Sawyer at Easter, and their mom was so happy that she chose me again to photograph them. The boys looked so handsome, and this time, I was even able to get a few shots of the entire family. The boys had fun playing and exploring their surroundings at the farm, so I just tagged along and captured their fun.

Next were the Kirkendall kiddos. It had been about 1.5 years since I had photographed Will & Myah. Boy, how they had grown! They are beautiful children, and the photos I did of them together were some of my favorites. They have the sweetest personalities, and have accepted their "big brother - little sister" roles perfectly. I just loved how they interacted with one another.

Then it was time for Gage. He showed up ready for his farm session with a leather vest, a duster (long cowboy coat), a cowboy hat, and some cap guns. He is so handsome, and he did a fabulous job during his session! I hadn't photographed him in almost 2 years, so there was a big change in him as well. I had so much fun with Gage!

Sienna and Layla were next. These girls are my nieces, the daughters of my brother. They reside in the state of Washington, and I hadn't seen them in over 3 years. They had just gotten into WV late the night before our session. I was thrilled to see them, and had a blast photographing them (and answering their 10 million questions) at the farm. They are precious, and I am so thankful that they are with us for the summer!

As things were winding down, Gunner & Harlow showed up for their session. Sara never disappoints in her wardrobe choices. The kids always look amazing! Gunner is such a sweet big brother, so protective and caring toward Harlow. And though Harlow is slow to warm up, once you get her started smiling, she can't stop! I always love having them for sessions. They are a pure pleasure to photograph.

Last in the long list of sessions was Danny. His grandma had contacted me about doing this session as his first birthday session, so I assured her that I'd work some number 1's into some of Danny's pictures during editing. I had no idea that he'd actually be holding up one little index finger in some of the pictures! It was almost like he knew what he was there for. He also had a great time running free in the hay field, so I just clicked as he ran. He is an adorable child, and his gallery turned out beautifully!

I feel so honored to have been trusted by so many people to capture their families on this day. I enjoyed every minute of it, and the response was so great, that a second day of Farm Fresh mini sessions has been added. We have to get it done before the hay is cut, so let's all keep our fingers crossed that Mother Nature smiles on us with another day of perfect weather.